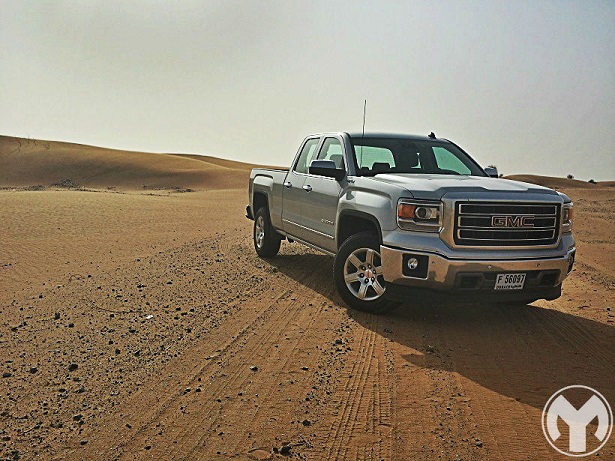 This week I received a not-so-usual vehicle for the road-test. In fact, this is the first time I have ever sat in such a vehicle let alone drive it so there were mixed feelings of uncertainty and curiosity. Pick-ups are not the ideal vehicles in many consumers’ wish list to drive on UAE roads unlike US where miles of highway make them a necessity. But, they are slowly becoming a norm here with the youth especially due to their swag factor.

As per consumer demands worldwide, Ford is the leader of this segment with the F-150 due to its toughness and overall blue-collar appeal. But, that doesn’t stop the remaining 2 brands – GM and Chrysler – from competing. Where Chevy Silverado has a more work-horse branding, GMC, on the other hand, satisfies the gangsta-rap image.  So, without further ado, let’s have a look at this bad boy in detail. 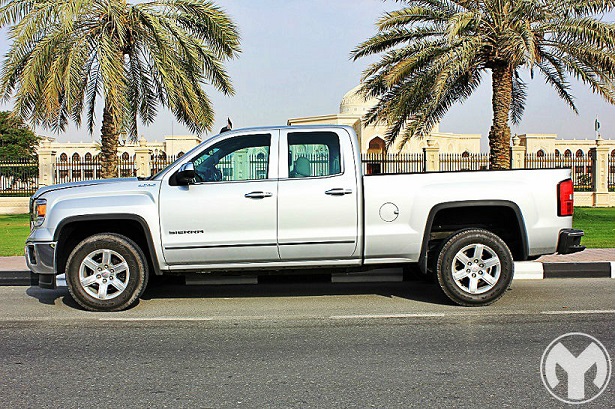 I drive a Honda Civic so you can imagine the first thought in my mind when I had a close look. Yes, I found it to be – no points for guessing – ridiculously huge. But, that doesn’t mean I did not like it. Sierra is one of those few vehicles which have character. From the word go, this is a purpose-built mean machine. It’s not trying to fit in at all, instead, it stands out among the other, especially Japanese, wannabes. From the big chrome grille to the chrome alloys, it spells swag.

The Sierra is based on the GMC Yukon and shares the same design language. There are various trim levels for the Sierra but the one I received was the Sierra 1500 Double Cab SLT. The Double Cab is the one having smaller rear doors and an extended bed. However, the ‘small’ doors are still big enough to squeeze in and out without hassle. Considering the generous ground clearance, one might think side steps will be included to ease the process of entering and exiting. But, alas, that’s not the case and I had to struggle a bit to enter this vehicle especially with my formal pants.

This huge size overall does have its disadvantages as squeezing into parking lots became a losing battle and I had to look for large empty spaces far away in the mall parking lot so that I can maneuver this truck away from confined spaces. Moreover, the extended length does not allow the truck to fit within the lines of the parking.

As with most American vehicles, expect hard plastics in the interior. But, thankfully, the plastic percentage in this car was on the lower side as our full options test car had a generous dose of leather wrapping on the instrument panel and arm-rests. Coupled with leather seats and steering, the interior was a pleasant place to be in and considerably relaxing. The only complaint here is the lack of proper insulation as I could hear wind noise when the car crossed the 100 km/h mark. 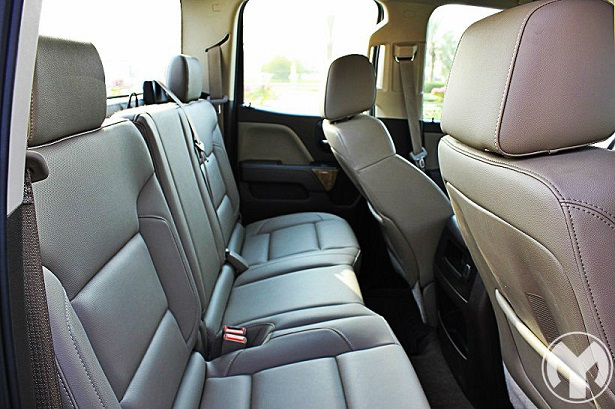 This car is huge from the outside as well as inside. And, that became an initial problem for me as shifting from a modest sedan to this behemoth meant changing my judgment of car dimensions. Moreover, the front hood seemed never-ending while taking turns and I always had that worry of hitting the pavement while turning. The outrageous turning circle did not help my case either. Also, driving this vehicle in one lane on the highway was a bit tedious as it kept on touching the lane markings on either side due to its width but, the lane departure warning system kept me alerted and for that I thank you GMC. Other than that, this car has a huge bed which can easily fit an ATV for dune bashing and the rear legroom is decent enough for 3 adults to fit in. Overall, this car takes time to get comfortable with but once you’re familiar then it becomes easy to drive. 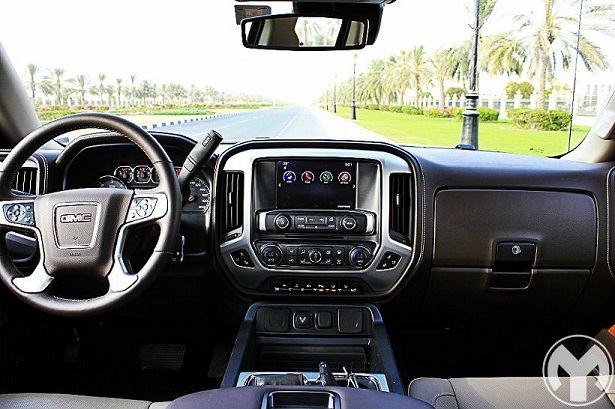 Since it’s a top-spec model so expect all the gizmos and gadgets American luxury has to offer. The touchscreen infotainment system takes a bit of a learning curve as there are buttons below the screen as well as on the screen to select the options. Also, one thing I truly missed in such a big-sized car was blind spot detection. Other than that, every modern safety feature is adopted including lane departure, collision warning and park assist. Moreover, the interior features included seat cooling/warming, heated steering, dual zone climate control and a lot of USB ports in addition to AUX and SD card reader. Also, it had a 230V 3-plug socket as well. Overall, the gadgets satisfy the asking price. 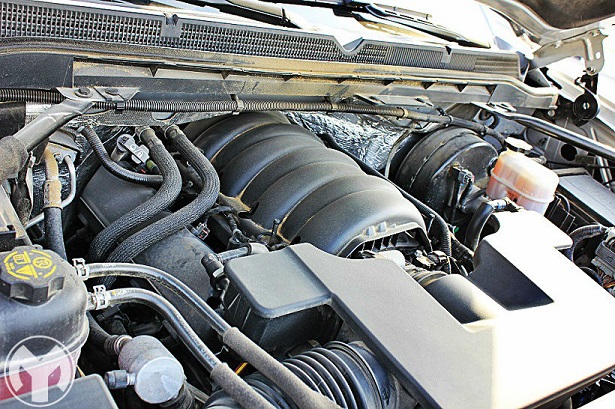 The car is powered by a 5.3 liter V8 producing 355 BHP and 520 Nm of torque. This engine is mated to a six-speed automatic transmission – enough to pull this monster from stationary position. The engine has the cylinder deactivation which helped in giving a decent fuel economy. In our test run, the car accelerated from 0-100 in 8.8 seconds and gave an average fuel economy of 14.4 l/100 km. This mileage is almost equal to Mazda CX-9 and that car is David compared to this Goliath. With all the praise, there is however, a downside – the transmission. For an auto gearbox, the downshifts were too violent. It felt like driving a manual and downshifting early resulting in engine load and rise in RPM. This experience was utterly weird for me considering the violence happened while slowing down gradually without using the brakes. Such downshifting made the whole car shake resulting in an uncomfortable drive. 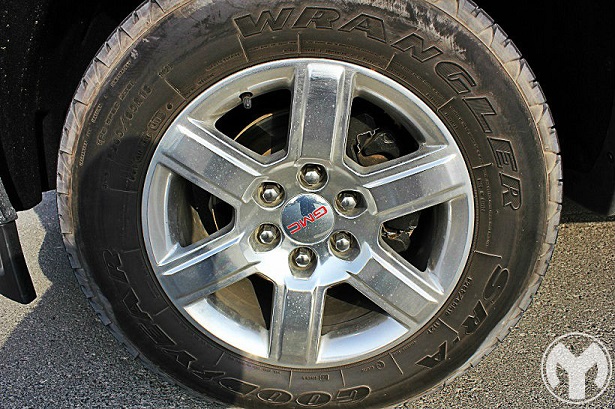 The GMC Sierra is a tall brute which means the ride will be lumpy. But, what I did not expect was that the suspension will be hard enough to make me feel each and every blemish on the road surface. I did not feel pot holes that much even in the Honda City. However, due to its trampoline of a suspension, going over speed bumps was fun as the car jumped up and down like riding a wave. Other than that, expect a lot of body roll as it feels like piloting a cruise-liner. Steering lacks feel so handling isn’t very impressive but good enough for a daily drive.

Brakes is another area where it took me a while to learn. Since it’s a heavy vehicle, it will take its sweet time to decelerate. So, make sure you press brake at least 100m in advance from your intuitive braking point. Once you get the hang of it then its normal. Our test run resulted from 100-0 in 3.5 seconds – faster than a Honda City. Good job GMC!

As for off-road capabilities, it is highly capable due to its low-range gearing, good ground clearance and of course power. But due to its long wheelbase, tackling dunes isn’t easy. But on flats, it just cruises along smoothly.

Overall, such handling and suspension suits the character and I did not have any major disappointments.

The GMC Sierra is the most impractical car I have ever driven – and that is its USP. It’s for people who like to stand out from the crowd of SUVs and super-fast race cars. This car has road presence. People changed lanes whenever they saw this mammoth in their rear-view mirror and I did not even need to honk. Such respect is not given even to a Bentley! So, I was genuinely pleased. In short, the Sierra is a big and heavy statement. Such a vehicle is not for the practical thinkers and tree-huggers. Instead, it’s for explorers.