This is the Dorcen Domy X7 and since it’s highly unlikely that you’ve ever heard of Dorcen, Domy, or the X7, let me take you through a short history lesson. The car you see above started its life out in 2016 as a Zotye and formed part of the brand’s Domy model series. Two years later, Zotye sold the model and design to another Chinese automaker called Dorcen who took it and built the G70s, but in a nutshell that’s how we ended up with the Dorcen Domy X7.

In typical Chinese automotive fashion, the Domy X7 is a mash-up of one too many cars with a strong Volkswagen influence. Bearing great resemblance to the Volkswagen Tiguan, it’s a good-looking car with LED headlights and 19-inch alloy wheels but I just wish the designers had spent some more time giving the X7 an identity of its own.

In the back, the steeply raked windscreen and high tail lamps give the Domy X7 a hunchback that is quite familiar to the Teramont X. As mentioned earlier, there are elements from many cars that have been put together, but what’s important is that it all looks quite nice in the end. 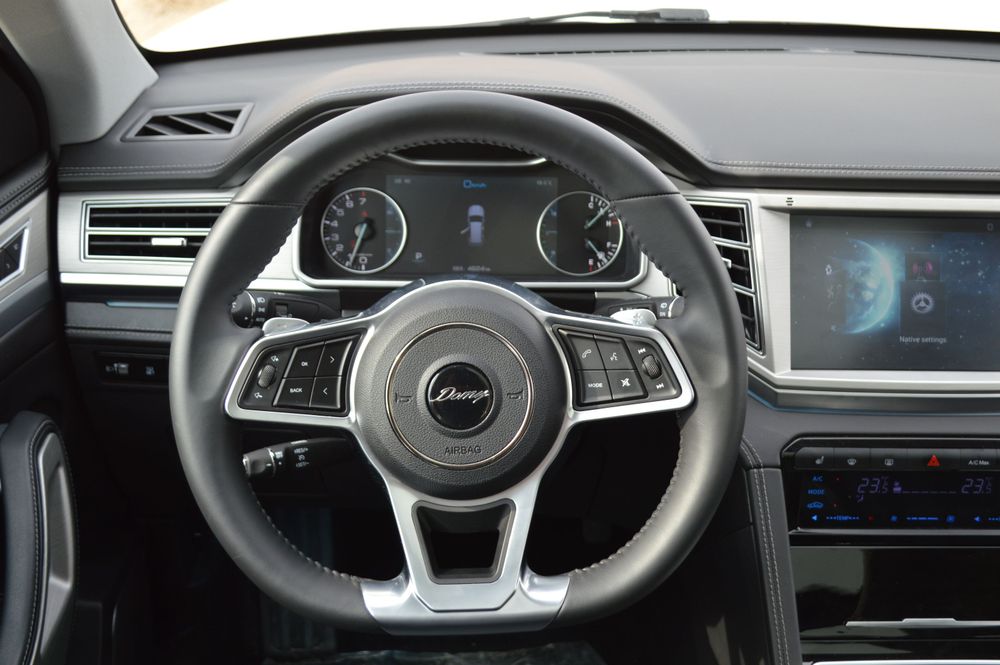 The Volkswagen influence seems to have rubbed off on the interior too with the overall design being very similar to that of the Volkswagen Teramont. Large pieces of aluminum trim and soft leather cover the dashboard and door panels, giving the impression of a premium, well-built offering. 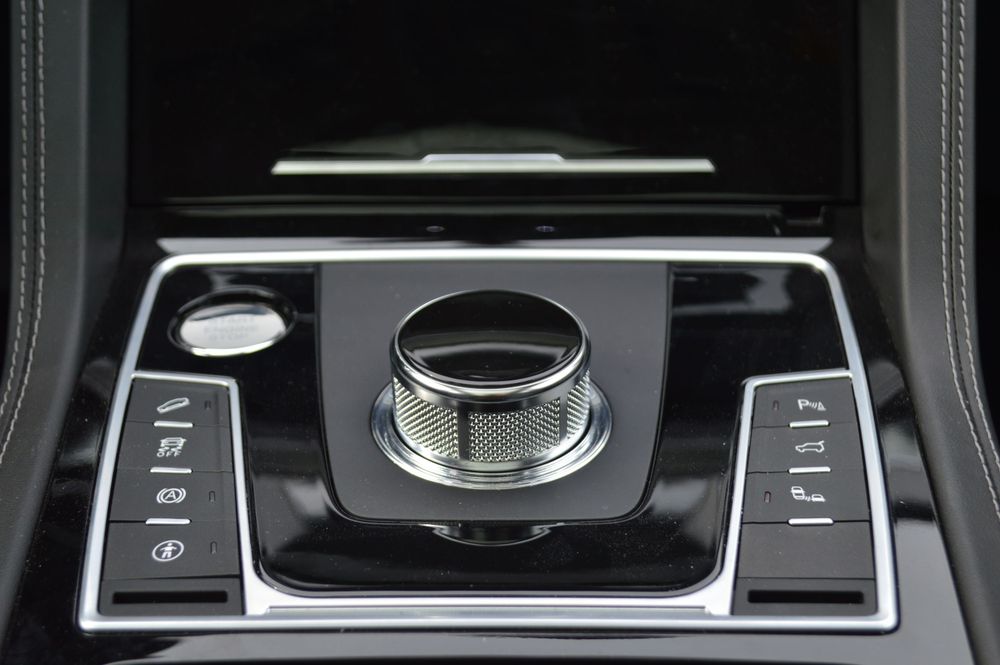 Speaking of things that seem to be borrowed, there’s the Range Rover shifter knob that lifts out of the center console every time the car is switched on and a steering wheel that is very similar in design to that in a Porsche 718 Cayman. The steering does offer tilt but unfortunately no telescopic adjustment, meaning you can adjust the height but not bring it closer or move it further away from you. 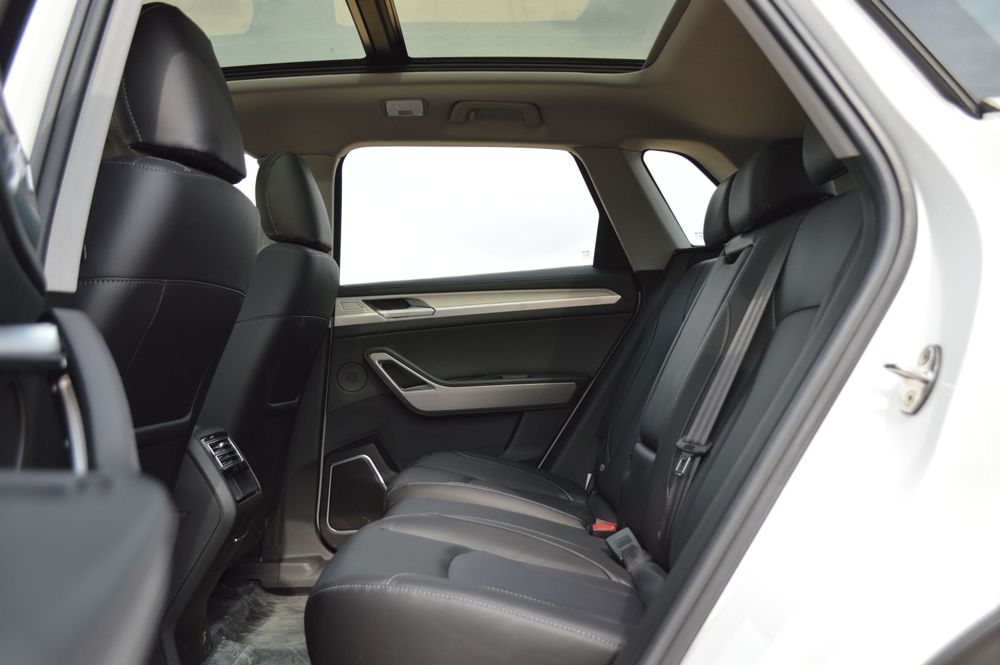 The seats in the back are very comfortable (just like the seats in the front) and offer lots of headroom and legroom meaning fitting three adults is no problem at all. What is likely to be a problem, however, is the single A/C vent. Yes, that’s right, for some very weird reason the Domy X7 comes with just one rear A/C vent. 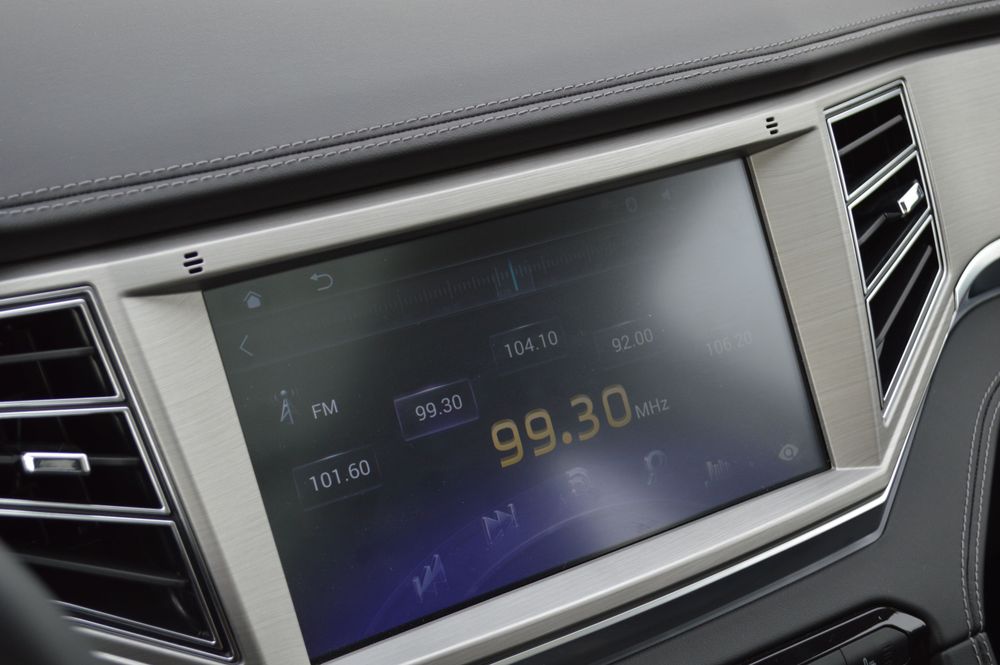 Now that we’ve got that out of the way, let’s move on to the more interesting features. Features that the Domy offers that no other car out there seems to offer. First up is a PM 2.5 Monitor and for those of you wondering what that is, it’s a pollution monitor that shows the pollution level both inside and outside the vehicle; handy, right? 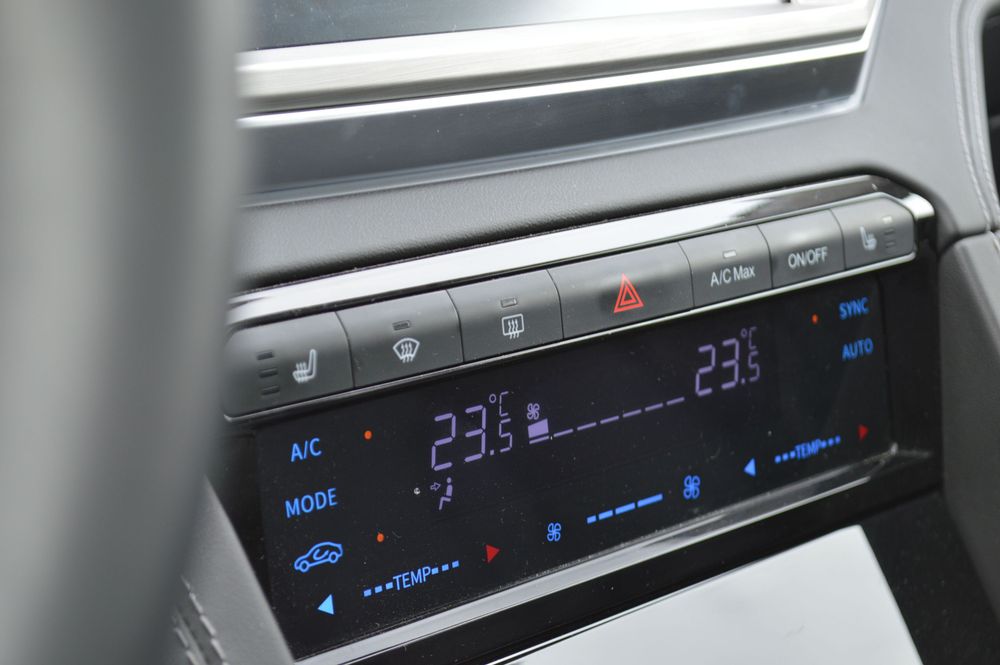 Next up is an E-Book reader. Apart from the obvious safety concerns related to reading an e-book while driving, an e-book reader is a great feature to have. Imagine having to wait 30 minutes for that not-so-punctual friend of yours. Now instead of fidgeting with your phone, you can relax and read a book too.

The third amazing feature (and trust me, this is something all other manufactures should adopt) is a child lock mechanism controlled from a button on the center console. Now when you have guests, you no longer need to get out of your seat, walk to the rear door, put your key in and remove the child lock.

Having said that, the Domy X7 is not without its quirks. The instrument cluster offers settings for the navigation system…but there’s no navigation. The infotainment system is smooth and easy to use but filled with grammatical errors. And controlling something as simple as the volume of your music is a little complicated as there’s no physical knob and you must do that from the screen. 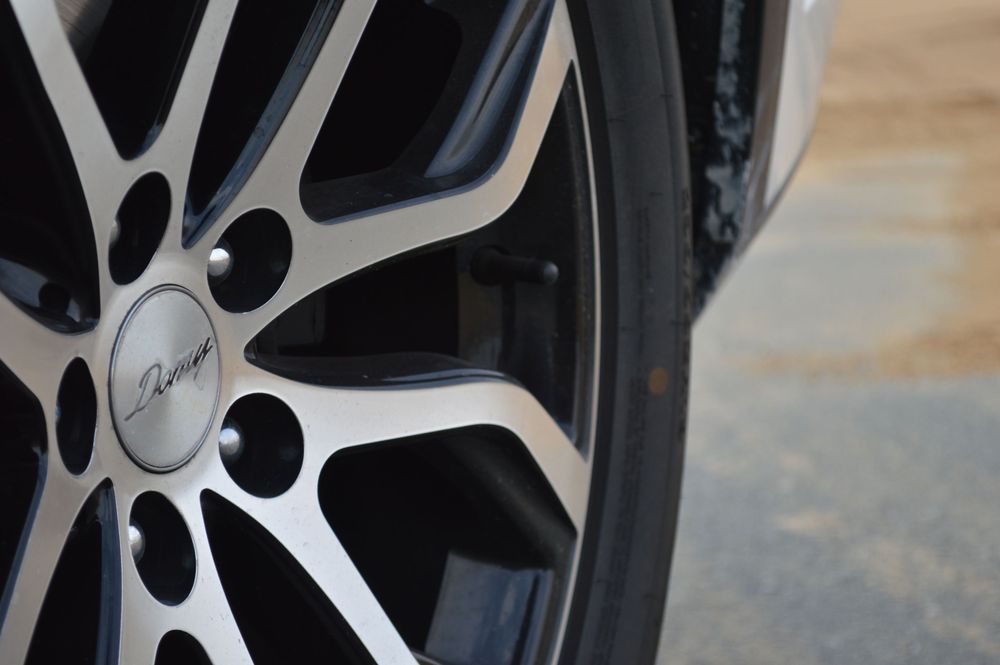 Powering the Domy X7 is a 2.0-liter turbocharged Mitsubishi engine that pushes 190 horsepower and 250 Nm of torque through a 6-speed automatic transmission to the front wheels. To drive at city speeds, the X7 is comfortable and very easy to navigate because of the light steering and great outward visibility.

Put it into Sport mode however and the gearbox gets all flustered, not sure whether to upshift or downshift. But I wouldn’t hold that against it because this really isn’t a car that’s meant to be driven fast. It’s also not a car meant to be driven off-road, and you can’t because it isn’t all-wheel-drive, but for some strange reason it is fitted with hill descent control… 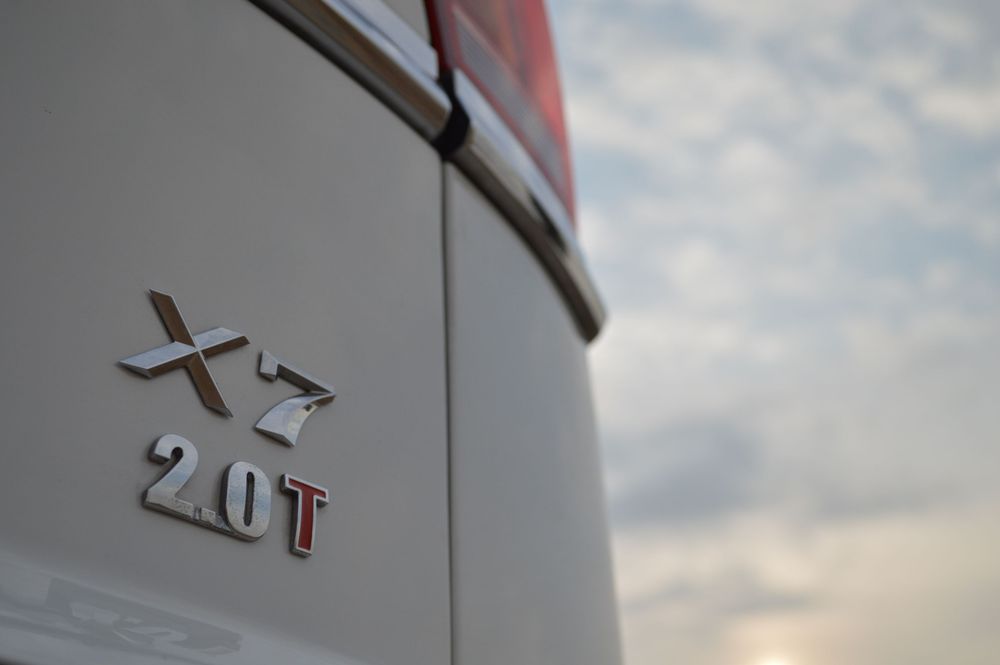 My one and only gripe with regards to the way this car drives are the brakes. Don’t get me wrong, they work perfectly well and bring the car to a stop very smoothly, but they do squeak. Who knows, maybe the car was abused by a bunch of other drivers before we got it but hearing the brakes squeak when the car’s driven just 5,000kms is never a comforting sound. 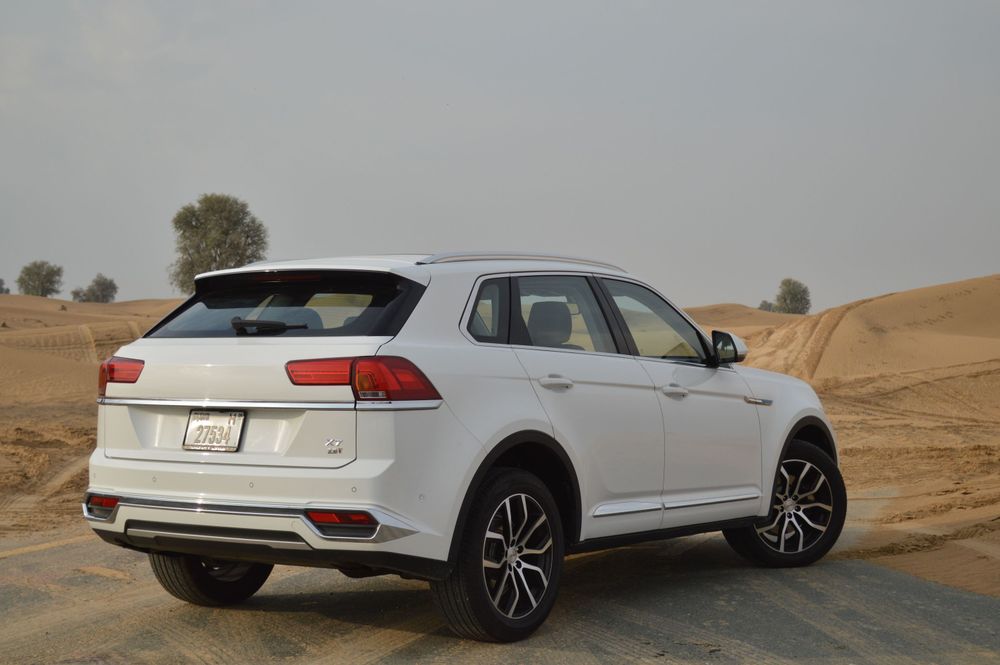 So here we are, at the end of this review, and I know the only question on your mind is how much does the Domy X7 cost? Without any promotions or discounts, the X7 costs 93,000 Dirhams (which is a lot) but thanks to an on-going promotion you can drive one home for just 62,800 Dirhams.

Now at 62,800 Dirhams is it better than its Japanese and Korean rivals? Yes, because it has a lot more to offer. In fact, you could even argue it’s better than its Chinese rivals from Haval and MG because it offers a 12-year / 500,000-kilometer warranty.