An overview of the upcoming 2020 Ford Mustang Mach-E 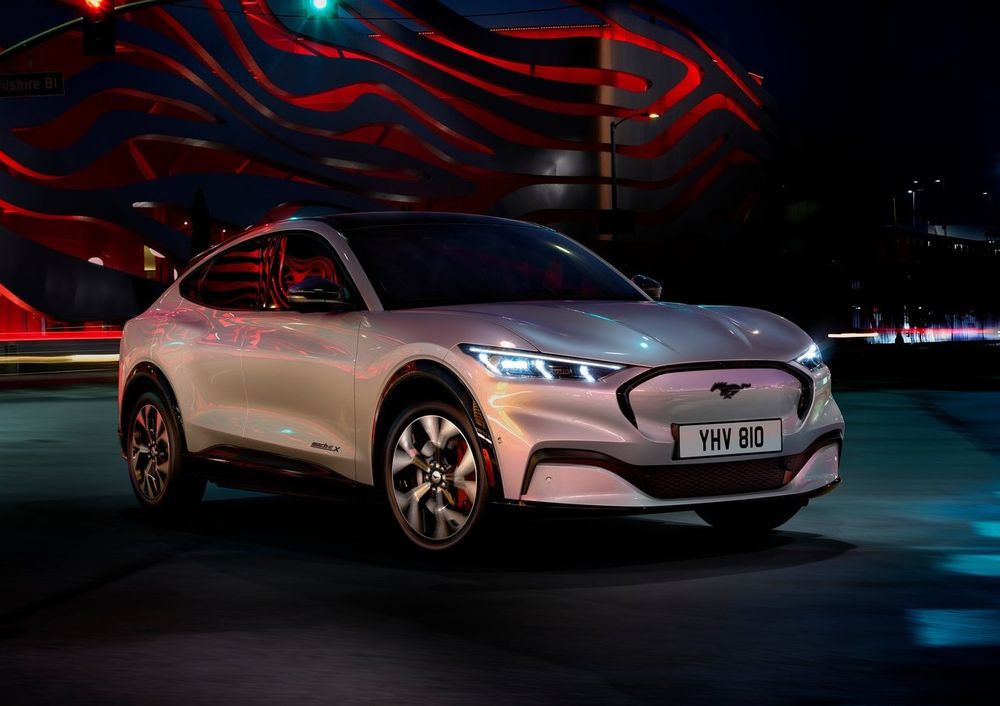 With the relentless push for electric vehicles (EVs) coming from all around them, almost every major automobile manufacturer has been prepping to unleash new and sophisticated EV models of their own. In the coming months, we are going to see an usher of sporty, high-performance, all-electric sport utility vehicles being launched. And one of the most highly-anticipated of these is none other than the 2020 Ford Mustang Mach-E.

First showcased in late 2019, the Ford Mustang Mach-E is built on top of the American brand’s all-new Global Electrified 1 architecture. The Mustang Mach-E will be assembled at Ford’s specialized Mexico plant, and the car itself will eventually be made available in at least two different variants which would themselves be grouped into multiple trim levels. So if you always dreamed of getting a Mustang but without the guilt of any harmful emissions, the Mach-E could well be the real deal.

The 2020 Ford Mustang Mach-E is a surprisingly elegant and urbane-looking vehicle, while also quite effortlessly pulling off this decidedly upscale and contemporary demeanor overall. As one can expect of a crossover SUV, this is a pony that has been given some boost in its height over its regular muscle car cousin. This means that the Mustang Mach-E portrays a sense of confidence and “ruggedness” that you would like very much, especially if you are into that sort of thing – a peculiarity that crossover SUV buyers are.

The front design of the Mustang Mach-E appears stylish, mostly courtesy of its sharp-looking LED headlamps with triple LED DRL units, a sculpted bumper along with a lengthened but muscular hood, and of course, the iconic Mustang badge on the grille. The side of the Mach-E sees chic 19-inch wheels, accompanied by some pumped-up wheel arches, muscular fenders and rear haunches, and a stylishly-sloped roof for the now-popular coupe look.

The rear of the Mustang Mach-E continues with the rest of the car’s sporty demeanor -- featuring a heavily-sloped rear glass area, well-integrated roof spoiler, high-set but now-familiar triple LED tail lamps, and a large bumper that gets the ubiquitous but functional air diffuser treatment. However, while the rest of the car looks modern and eye-catching, the rear of the Mustang Mach-E could divide some opinions. 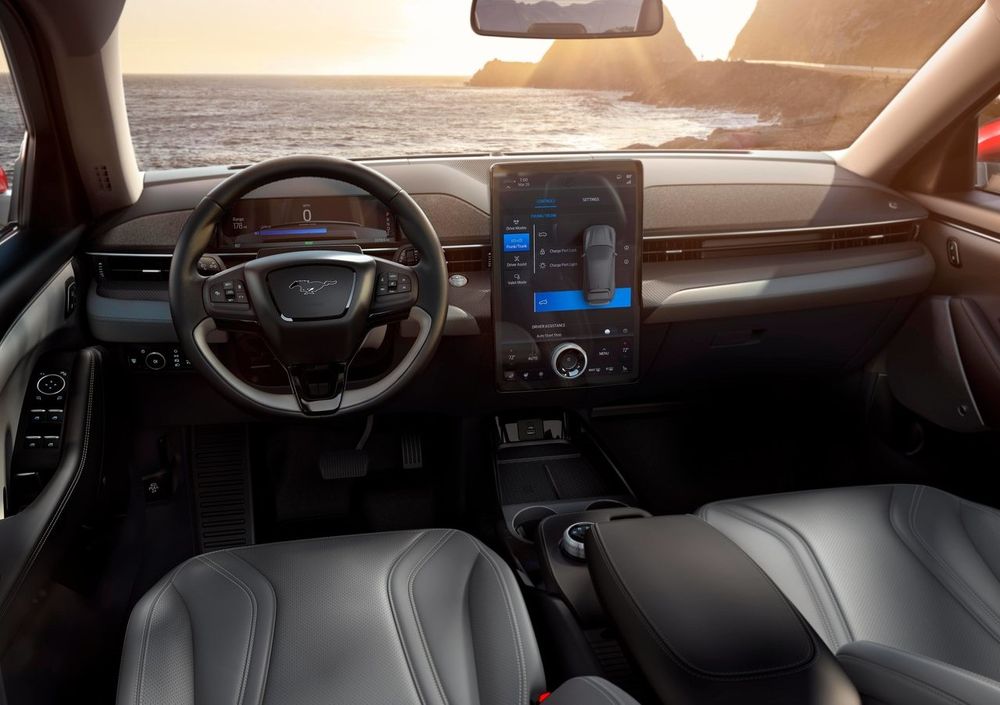 The interior of the 2020 Ford Mustang Mach-E is undeniably more contemporary and minimalistic than the regular pony car. Of course, it is sort of in line with what you will see inside a similarly-themed car such as the Tesla Model X but much more distinguishable from the likes of the Jaguar i-Pace. The moment you step inside this cabin, you will be greeted with a vast yet low dashboard – the front half of which is covered in a suede-like material, and it also houses the fully-digital driver’s instrument display.

Then there’s the absolutely massive 15.5-inch HD central touchscreen, housing the Mach-E’s infotainment system. Even better, this huge screen comes with a very handy and physical knob to control and navigate through many of its extensive functions and features. The Mustang Mach-E comes with comfortable and accommodating seats (especially upfront), while the massive panoramic glass roof should allow enough light into the cabin and make it feel airier. However, the dipping roofline would certainly have some impact on the headroom for taller passengers seated in the back.

While there will be multiple drivetrain options available later, the entry-level Ford Mustang Mach-E will come with a 75.7 kWh battery pack. This unit sends its power, which is approximately 255 hp, spinning the rear wheels via a reduction gearbox. In terms of performance, the 75.7 kWh version of the Mach-E is capable of touching 100 km/h in 6.0 seconds or so. Meanwhile, the maximum range for this entry-level variant is reported to be 370 kilometers. 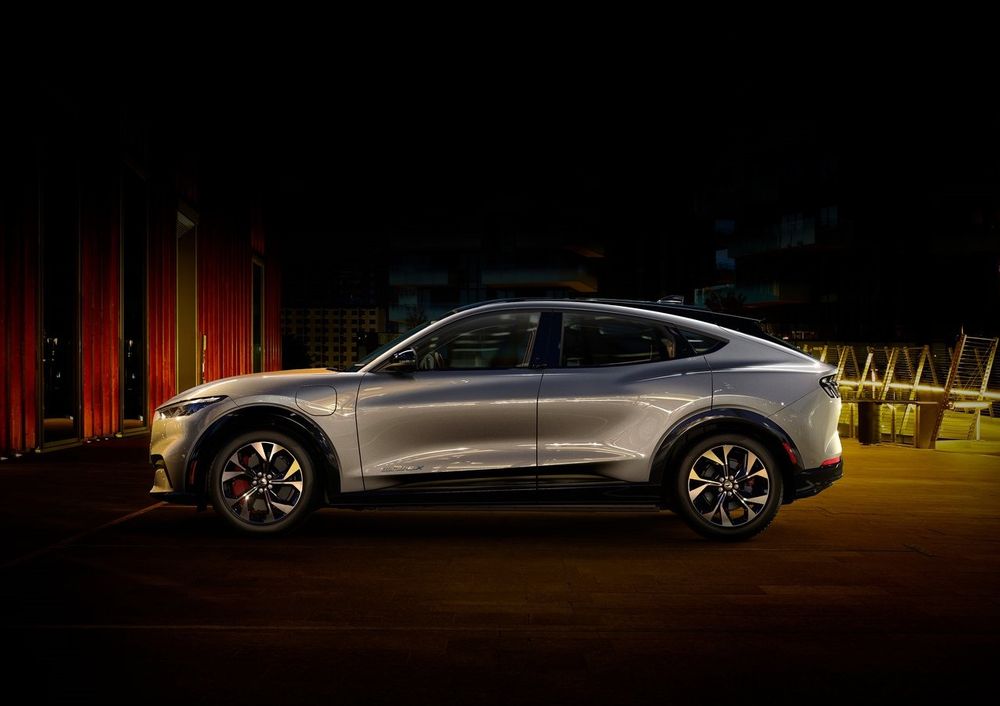 The Ford Mustang Mach-E is scheduled to be launched by the end of 2020, though its UAE arrival could be sometime in early 2021. However, the Mustang Mach-E will certainly heat up competition in the segment.