An overview of the upcoming 2020 Audi Q3 Sportback 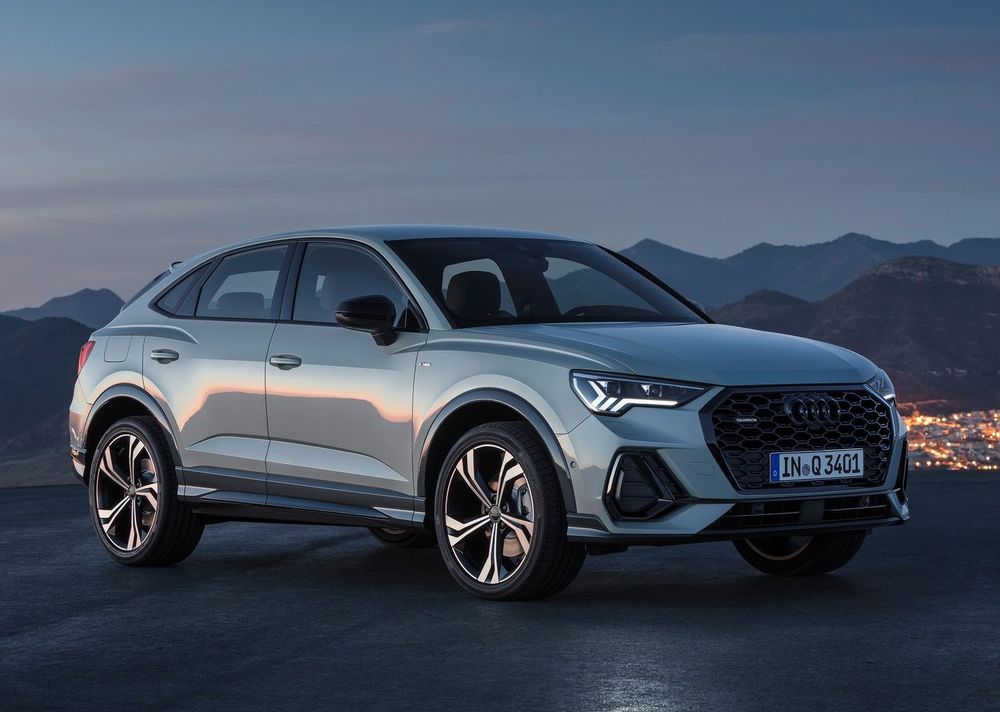 Of late, Audi has been on the road to changing the way it develops and markets its cars - in the belief that the rapidly changing market demands it to do so. The posh German automaker has claimed that it has been studying markets worldwide and plans to reduce some variants of some of its models in the coming future. However for now, Audi has taken the wraps off of its all-new 2020 Q3 Sportback. The 2020 Audi Q3 Sportback, as the title suggests, is essentially a standard Q3 crossover but with the added masala and panache of a coupe-like body style. Of course, with the company trying to cut down on its complicated versions/variants in its model line-up, creating a whole new platform for the Q3 Sportback wouldn’t have made much sense. To ease the back pressure in production costs, Audi chose to stick with the regular Q3’s platform for this one -- changing the outer shell for the desired effect, instead.

The 2020 Audi Q3 Sportback falls under the category (rather sub-category) of the ‘Compact SUV Coupe’ and as such, its target audience is likely to be those who don’t mind losing practicality and subtlety for gains in outright flamboyance and status. Audi’s new entrant will enter the ring with competition coming from the likes of the Mercedes-Benz GLC Coupe and BMW X2. Sales of the Audi Q3 Sportback are slated to commence later this year in Europe, with other markets supposed to receive their first batch starting next year.

For all intents and purposes, design-wise, the 2020 Audi Q3 Sportback looks exactly like its Q3 brethren right to the point where the A-pillars meet the roof. Of course, there have been some changes such as with the installation of all-black front trim elements - including for the octagonal Singleframe grille with its new honeycomb design, with the aggressive bumper moldings enhancing the character of the Sportback version and thus helping it appear, well… sportier. Along the sides is where you’ll notice this car’s coupe-like profile as the roof starts sloping down past the B-pillars. The heavily raked D-pillars are part of the ‘coupe’ course along with the flamboyant yet muscular bodywork, sporty alloy wheels plus some glossy body cladding with the brand’s prominent ‘four rings’ logo on either sides.

The rear of the Audi Q3 Sportback features a stylish roof spoiler, steeply sloped windscreen that leads to a subtle lip on the sculpted tailgate, gorgeous wraparound all-LED tail lamps, and an aggressively-designed bumper that amalgamates some faux vents, glossy trim and an air diffuser. The 2020 Audi Sportback measures 4.500 meters in length, 1.843 meters in width, 1.567 meters in height, and boasts a wheelbase of 2.680 meters. For its size, the Q3 Sportback’s boot capacity of 530 liters is nothing to scoff at. 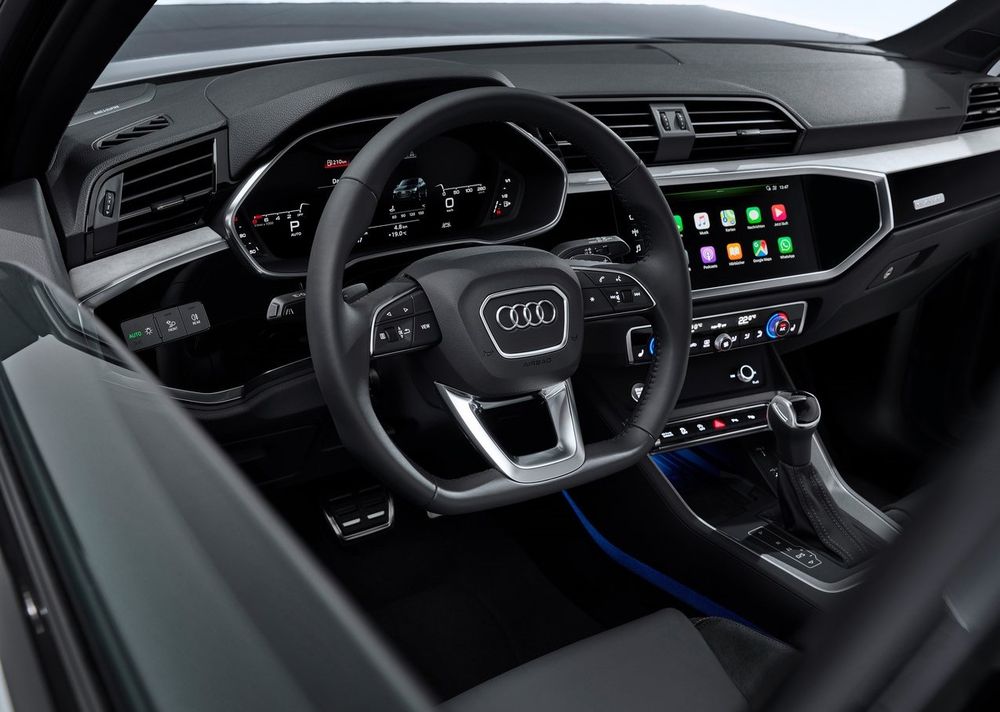 If you have seen the interior of the new-gen Q3, then that of the 2020 Q3 Sportback would seem like déjà vu. The two cars’ driver-oriented cabins share a similar setup - identical dashboard, center console, digital instrument cluster (aka Virtual Cockpit) and control surfaces. The Q3 Sportback, though, comes as standard with a sportier flat-bottom steering wheel and Alcantara along much of the surfaces. The seats are pretty lovely, but headroom and shoulder room at the back are not. On the other hand, build quality is typically Audi -- everything feels well put-together and of high quality.

The sportier 45 TFSI variant of the Audi Q3 Sportback is powered by a 2.0-liter turbocharged four-popper that develops 230hp and 350Nm of twist. Assisted by a 7-speed S tronic dual-clutch transmission and Quattro all-wheel drive, the Q3 Sportback will hit 100 km/h in approximately 6.5 seconds. The 45 TFSI’s its top speed is 233 km/h and its fuel economy is rated at 7.7 L/100 km. Meanwhile, the bases 1.5-liter turbo four comes with a 48-volt mild-hybrid system that makes 150hp and 250Nm of peak torque. 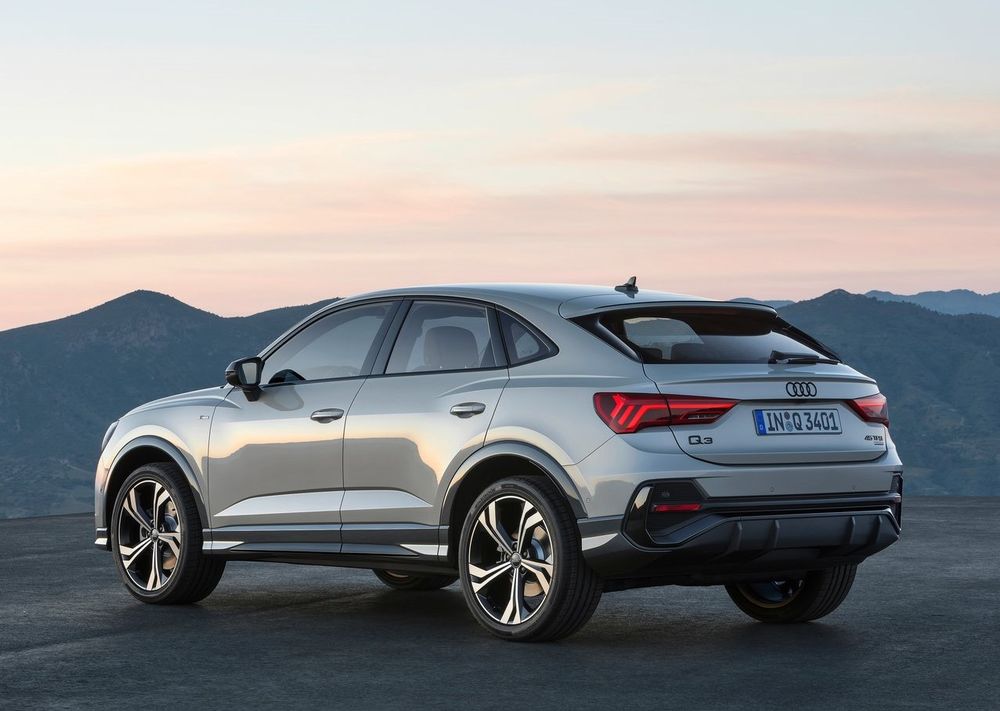 The 2020 Audi Q3 Sportback will make its way to the UAE sometime next year. There’s no doubt that it will bring in more customers into Audi’s stables, especially considering its chic styling, efficient engines and decent performance, and a host of safety and convenience technologies.